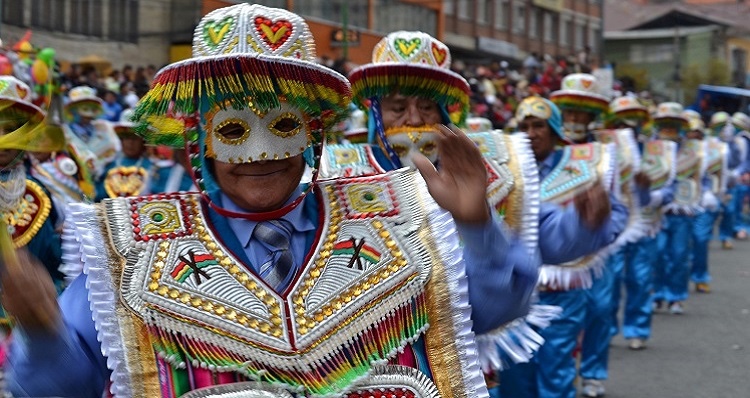 The one thing that stood out on this trip, was the colors were beautiful in this festival . Outfits are fruitful and display the love amongst the people display the true meaning of joy in every sense of the word.

Carnaval de La Paz is a party-like carnival. It is celebrated throughout Bolivia with unlimited attractions for it’s attendees.

It portrays the Masterpiece of the Oral and intangible heritage of humanity; due to which it has been listed among Unesco’s heritage sites since 2001.

Attendees will have access to local crafts, and local Bolivian’s lifestyles and cultures.

The Carnival of Oruro is a religious and cultural festival in Oruro, Bolivia. It has been celebrated since the 18th century. Originally an indigenous festival, the celebration later was transformed to incorporate a Christian ritual around the Virgin of Candelaria (Virgin of Socavón). The carnival is one of UNESCO‘s Masterpieces of the Oral and Intangible Heritage of Humanity.Oruro Carnival

The Diablada, dance primeval, typical and main of Carnival of Oruro a Masterpiece of the Oral and Intangible Heritage of Humanitysince 2001 in Bolivia(Image: Fraternidad Artística y Cultural “La Diablada”.

Llamerada Dancers in the Carnival

Throughout the festival, more than 48 groups of folk dancers specializing in 18 different folk dances perform a pilgrimage to the Shrine of the Tunnel every Saturday of the carnival in a traditional parade. The traditional Llama llama or Diablada became the leading traditional dance of the festival.

La Paz is one of two capitals in Bolivia, the second being Sure

La Paz is the capital with the highest elevation

Bolivia lost its cost line to Chile, but still has a navy

One of the most popular sports in Bolivia is soccer known as Futball.

Other popular sports Bolivia enjoys are volleyball and table football, both of which can seen being played on street corners. Volleyball has increased in popularity as an alternative to football, as both can be played with just a ball. After marking the net with a string or cord, the game can be played on any surface.

There are many other sports Bolivians like to practise or watch, including tennis, swimming, horse riding, gymnastics and car and bike racing. Notable exceptions are the sports of American football and baseball which despite many attempts have never captured the heart of Bolivia.

They are distinctive for wearing traditional feminine dress for their free range wrestling bouts, of lace petticoats, pollera skirt, shawl and a bowler hat over their hair which is plaited in two braids. The fighting women are called cholitas luchadoras and this practice of wrestling which began in 2001 has become more popular than traditional male wrestling.

As a poor third world country with little prowess in sports, Bolivia has seen great motivation and inspiration from José Gamarra Zorrilla. A native Bolivian, who promoted value of sports throughout the country and the 1970’s led his country to the best sporting results they had ever seen.

A Blog About Autistic Interests

People with Autism Spectrum Disorder often have intense interests or fixations. This blog is a space for young adults to showcase their interests, thereby providing a medium for their voices to be heard. All of the interest posts are written by autistic people, with commentary from Dr. Christine Grimaldi.

Many of our interests are drawn from pop culture and contemporary media; this includes franchises such as Marvel, Pokémon, and Lego. Certain media or topics seem to draw particular attention from autistic audiences, but special interests can also cover other topics — for example, science or history.